We?re in the midst of a great spring season for our team! Sophomore Nick Meglino just returned from Sophomore Nationals in Virginia Beach where he represented our program well! Our seniors are finalizing their college plans. We have a TON of our team training at clubs this off-season, getting better everyday! (REALLY proud of the way they?re training!) We?re planning our trip to take a bunch of guys up to train at Cornell University for a week in the end of June! It?s an exciting time to part of our program!

Cliffton Wang also received a final feather in his cap last week, when he was named the LoHud/Journal News Westchester-Putnam Wrestler of the Year. Check it out here:

Cliff?s high-profile accomplishments have been getting a lot of well-deserved attention over the past few weeks, but his is just one of many great stories in our program.

Winning is great but it all comes back to our mission: Building Champions on the mat and in life.

And, as we all know, ?life? represents a far bigger piece of the pie than the ?mat.?

Like I said, winning is great, but the reality in our program is that winning is just a by-product of the process. And it?s the relentless focus on the process of excellence that really creates the results.

I probably just piqued the attention of a lot of our wresters and alumni by throwing out the ?p-word?. We talk about process everyday. When you come through our program, the process is indelibly imprinted upon you. You could say a big part of our process, as coaches, is a continual focus on the process of developing great wresters and great people!

I?d like to talk to you a little about one of many great examples of that in our program: senior Andrew Williams.

Andy joined the team as a small 9th grader, having never wrestled before. He was undersized for 99 pounds – our lightest weight class – and neither very strong or very aggressive. 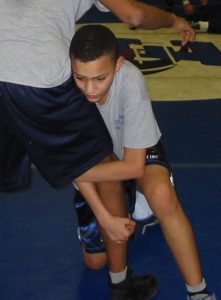 He took his lumps. In fact, he got pinned every single time he took the mat his freshman year. It wasn?t easy, but Andy kept coming back. Andy?s human so there were definitely times when he doubted himself, questioned whether wrestling was the right sport for him and even thought about quitting. But he kept coming back. As coaches, we asked him to believe in the process. We asked him to buy into the idea that if you put in the work, it?s inevitable that you will ultimately find success.I don?t know of any other sport where there?s such a direct correlation between the commitment you make and the result you eventually obtain, which is exactly what makes wrestling such a perfect vehicle for teaching these kinds of lessons.Andy worked hard and continued to improve bit-by-bit. His sophomore year he won 7 matches and finished with an overall record of 12-19. Again, he questioned why he worked so hard for results that fell short of the lofty goals he set for himself.

Now it?s easy for most of us to sit here reading and recognize this progress, but it?s way easier when you?re in the thick of it, to only see outcomes that you feel don?t match up to the effort you?re putting in. After all, wrestling is HARD – but, again, that?s what makes it special. That was Andy?s situation – he didn?t see the progress, he only saw his failure to meet his own goals.

Still though, Andy dug deep and recommitted himself to achieving those goals. And the progress continued. By his junior year he finished his season with a 19-13 record, but failed to place in the section. The progress was there, but, still, Andy was held back by limiting beliefs. While Andy was really starting to have faith in himself, when things got tough in a match, that faith seemed to crumble away. He?d usually start off well, but when he?d give up a takedown or face a bad call suddenly the confidence was gone and usually so was the match. He lost a lot of tough matches that way – a lot of close matches. Matches that as a coach, you sit there in the corner, thinking, ?Man, Andy is capable of beating all of these kids if he would only recognize his own greatness.”

I?m not gonna lie, it was probably just as frustrating for us to watch, as coaches, as it was for Andy to experience it first-hand.

The difference is, though, that we, as coaches, still deeply knew that a steadfast focus on the process would undeniably lead to the results Andy sought.

Mike Tyson once said, ?Everyone has a plan until they get punched in the mouth.” 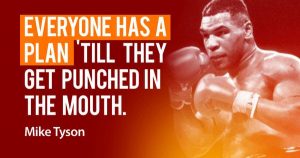 I think that?s applicable here. It?s easy to believe in yourself and believe in the process when things are going well. But when things get tough, when you?re not seeing the results, it becomes really hard for us to stay the course.

As part of our Edgemont Wrestling Family, I know that?s something we can all relate to. It?s easy for parents or teachers or leaders of any kind to spit out platitudes about “putting in the work” and “believing in yourself,” but it?s a whole other thing to put kids in the crucible of high school wrestling and have them live it. To have them face their setbacks, their fears and their failures head-on and keep marshaling forward.

Quite honestly, that?s the difference between Edgemont Wrestling and most any other program or activity at Edgemont. The one-on-one nature and physicality of wrestling is a unique vehicle for our student-athletes to learn these lessons in the most visceral, impactful way possible.

Our banners on the walls of the gym, filled with name after name of Edgemont Wrestling champions, are a testament to this.

And Andy is no different.

After the tremendous disappointment of failing to place at Sectionals his junior year, Andy again found himself in a place of self-doubt. But our coaches believed and Andy kept working. And Andy started to believe.

I?d love to tell you everything got all rosy from here. But that?s not the way life works.

Senior year, Andy had some awesome victories and some painful setbacks. Some gritty performances and some mental lapses. But ?the process? kept on working in the background all the while.

When Sectionals came around, Andy had another opportunity to show the world exactly what that looks like.

In the quarterfinals, after giving up a reversal, Andy came from behind and won in sudden victory overtime upsetting the #3 seed from Nanuet.

In the semifinals, Andy lost his lead in the 2nd period and, again, never stopped believing in himself. He came from behind to force overtime where he again won in sudden victory upsetting the #2 seed from Pearl River.

In the finals, Andy finally lost to the #1 seed who he took to overtime the week before.

Andy ended his Edgemont Wrestling career in the elite club of Section 1 Finalists and as an All-Section Wrestler. The real victory, however, is what he?ll take from this experience for the rest of his life. 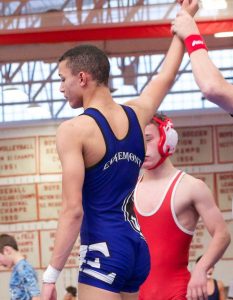 You?re part of the Edgemont Wrestling Family, so you know – Andy?s is but one of many, many similar stories of kids who have benefitted from what Edgemont Wrestling provides – a platform and a path to ?Building Champions on the mat and in life.”

The fact is the magnitude of this impact is a direct product of the support we receive from you, our Edgemont Wrestling Family. So much goes into ?the process? and much of it is well beyond what our school budget funds. That?s why our Annual Edgemont Wrestling Club Giving Campaign is also such an important part of the process.

We all have our own personal ?Andy Williams? story. I know I do, and I feel so fortunate to be in a position to help write that story for more of our student-athletes.

You have the power to help write that story too. Our Giving Campaign is on for three more weeks and our goal is 60 donors. Every gift helps no matter the size.

Whether you can help or not, PLEASE take a look at why a gift to our program is so important to making the process a reality.

Thank you so much for your support!